The nearly two-acre pond along Cedar Springs Drive and Silver Maple Trail is a signature feature of Cedar Springs, and attracts residents and their families to enjoy recreation around its perimeter. Residents can fish from the stocked pond, or enjoy one of several permanent benches placed around it.

Learn more about the unseen benefits of (and important work done by) our water retention pond.

Because of the high fish population, catching a fish is easy, but their growth has been stunted due to catching and releasing. Residents are encouraged to keep the fish they catch rather than catching-and-releasing.

Due to liability concerns (brought to our attention by the HOA’s legal counsel), swimming, boating, ice fishing, and ice skating are not permitted in or on the Cedar Springs retention pond.

Do Not Throw Culvert Rocks into the Pond

The large stones surrounding the culverts control erosion and prevent us from dredging the culverts as frequently. They’re expensive to replace. Please do not allow children to throw rocks into the water.

The Cedar Springs retention pond features two aeration mechanisms that promote the health of the pond: the fountains, which spray water into the air, and the underwater diffusers, which move air from the bottom up toward the surface.

The east aeration unit was added in 2018, and operates three bottom diffusers. The HOA plans to add a fourth unit at the west end of the pond in the near future.

There’s much to learn about how aeration benefits our pond, and our pond bacterial program. Learn more.

In summer 2020, the pond fountains were repaired and are once again in working order.

We are also following their advice to plant native landscaping around the edge of the water to help with soil erosion and to filter the stormwater more effectively. For more information about the recent work on the pond, see all recent Updates.

What’s Next for the Pond

A well-functioning pond requires regular upkeep so that it can remain a home for fish and wildlife. Help keep our pond beautiful and thriving by joining the Pond Committee. Find out more about this committee’s work and future plans for the pond. 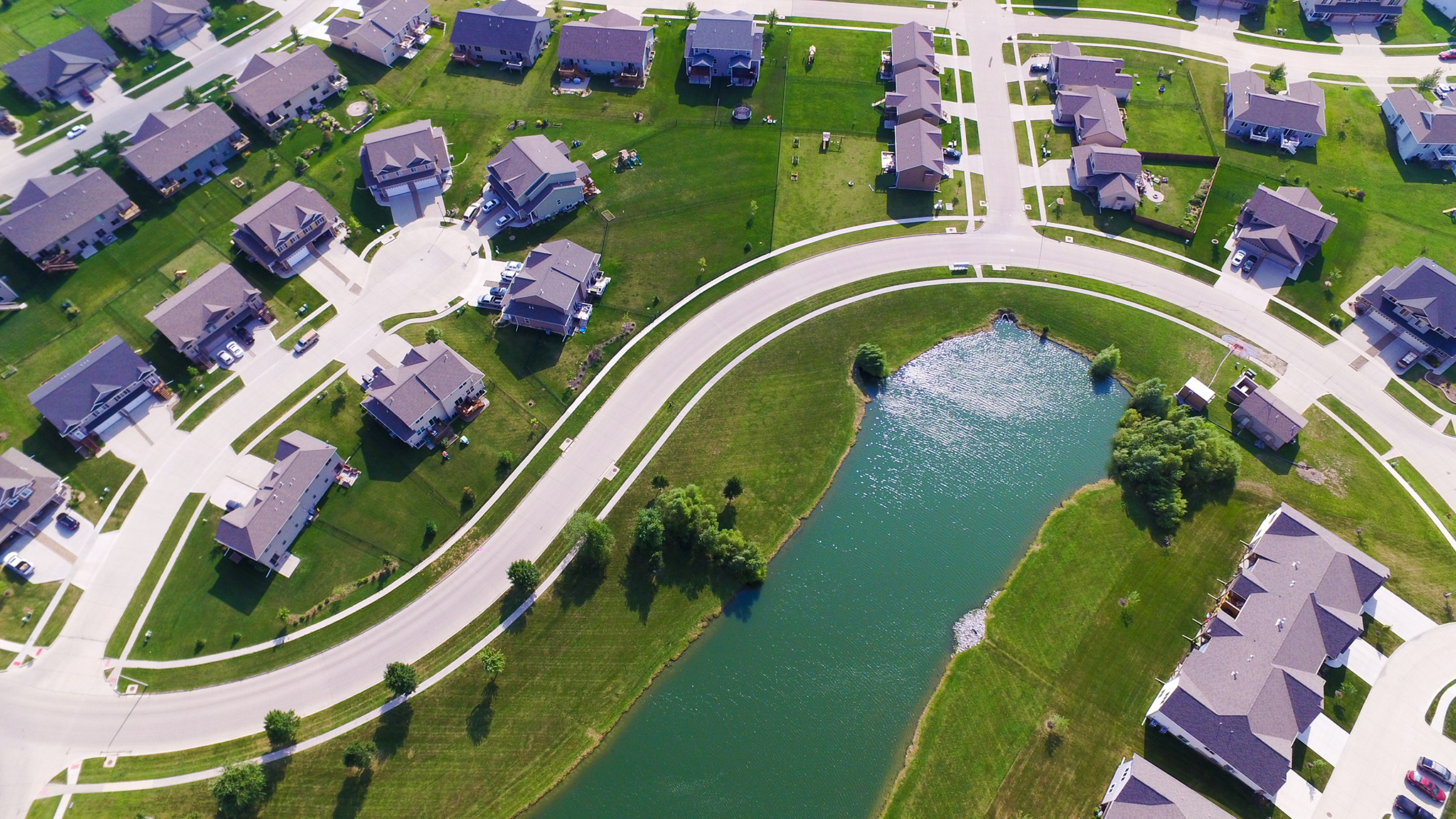 Our pond is more than it appears; it’s a water retention basin that plays an important role in controlling stormwater runoff.

Retention ponds store and slow runoff, especially from areas with concrete development. Stormwater flows much faster from concrete than prairie, and diverting it to a basin ensures it doesn’t occur too quickly.

After capturing runoff, the pond’s natural processes work to remove pollutants. Retention ponds should be surrounded by natural vegetation to improve bank stability and improve aesthetics.

Water enters the retention pond via storm drain culverts around the perimeter of the pond. Each culvert is surrounded by large rocks to prevent erosion. The culverts that feed the pond allow large amounts of water to enter, while the outlet riser near the east bank lets out small amounts of water as needed to maintain the proper water level.

How do we maintain a healthy retention pond?

In August of 2018, an aeration unit was added near the east end of the pond, which operates three bottom diffusers. Aeration increases the health of the pond by infusing oxygen into the water and maintaining constant oxygen throughout the year.

One aerator remains operational over the winter, so ice cannot completely cover the surface. This keeps oxygen levels up so harmful gases don’t get trapped below the ice, leading to fish kills.

As a pond ages, nutrients accumulate at the bottom and become muck, giving ponds a bad odor and providing habitat for leeches. Aeration combats muck and other decomposing debris by increasing the dissolved oxygen and circulating the water. This encourages the colonization of beneficial aerobic bacteria that consume the nutrients to reduce existing muck build-up and prevent it from accumulating in the future.

Nutrients can also be suspended in the water column, causing the pond to look murky. By reducing muck and excess nutrients, increasing oxygen, and circulating the water, water quality and clarity are improved.

Additionally, from pond water aeration, algae and weeds will be reduced, since there will not be as many nutrients to fuel their growth.

Oxygen from aeration sustains fish, but it’s also needed by beneficial bacteria. Aeration is important because without oxygen, a pond will go into an anaerobic state. Anaerobic bacteria are not as efficient at breaking down organic material as their aerobic counterparts. Additionally, anaerobic bacteria produce carbon dioxide and hydrogen sulfide when digesting organic material, giving the pond a rotten-egg smell.

In contrast, beneficial bacteria produce a harmless gas when breaking down muck and debris. Incorporating aeration into the pond increases the amount of dissolved oxygen in the water, keeping your pond functioning as a healthy aerobic system.

The thermocline is the border between the warmer, surface water and the colder, deeper water. Aeration is important because it circulates and mixes the water to eliminate these stratified layers by moving the cooler oxygen-starved water to the pond’s surface, so it can become infused with oxygen. The warmer, oxygen-rich water then drops to the bottom of the pond to fuel beneficial bacteria.

With all this churning, the water temperature of a properly aerated pond will be no more than a few degrees different throughout.

5. Reduces the risk of a fish kill

Fish perish from time to time, but when many die at once, it’s often linked to low oxygen conditions. In winter, gases released when organic debris decomposes can become trapped when the pond freezes over; this reduces the oxygen available for fish. If enough oxygen is displaced, the fish will suffocate. Aeration pumps fresh oxygen into the pond and keeps an opening in the ice to allow for gas exchange.

In the spring and fall, turnover events due to stratified water can cause a fish kill. During a turnover event, a stratified pond rapidly mixes, depleting the oxygen from the surface water as it combines with the bottom’s oxygen-starved water. Pond water aeration will eliminate the thermocline and prevent spring and fall turnover.

Natural pond bacteria is added to the water each month to help decrease the amount of algae growth.

A special blend designed for ponds in the Midwest is utilized. Bacteria packets are added starting in March, when the water temperature starts to rise, and are no longer added started in October, when the temperature begins to drop.

Not only does this product help maintain a healthy balance of bacteria, it also adds vitamins, minerals, micronutrients, and barley straw to condition the water and help the living bacteria flourish and restore the microbial ecosystem.

In the summer of 2020, rainstorms produced several inches of rain in a short period of time.  The retention basin did its job containing all of this runoff from area homes, but it also held all of the chemical and fertilizer runoff from these lawns.

This caused what is called an algae bloom. You may have noticed the thick, green algae growing on the top of the water around the edges. The bloom was controlled by adding extra packets of the natural pond bacteria.

Have a question or concern? Contact the HOA board by email, regular mail, or by completing the form at right.

Need a dues acknowledgement for closing? Submit a request.